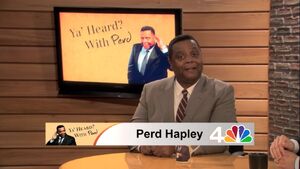 Ya Heard? With Perd is a television news program hosted by the Pawnee anchor Perd Hapley. Guests include Ben Wyatt in the episode "Media Blitz", when he attempts to defend his ability to help Pawnee fix their budget problem, and instead has a meltdown. Leslie Knope has also appeared on his show several times.

Retrieved from "https://parksandrecreation.fandom.com/wiki/Ya_Heard%3F_With_Perd!?oldid=8716"
Community content is available under CC-BY-SA unless otherwise noted.