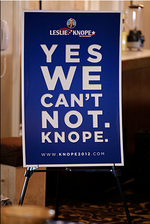 Writing of Season 5 begins in June but some minor details have been revealed. The season will follow Leslie in her new job as City Counselor and the rest of the Parks Department dealing with her absence. Some of the characters will find love in Season 5, while Leslie and Ben's relationship is put to the test as Ben works in D.C. for several episodes.[1]

Season 5 videos can be viewed here.