The second season of Parks and Recreation originally aired in the United States on the NBC television network starting September 17, 2009, and ended on May 20, 2010. The season was produced by Deedle-Dee Productions and Universal Media Studios, and series co-creators Greg Daniels and Michael Schur served as executive producers. Like the first season, it focused on Leslie Knope and her staff on the parks and recreation department of the fictional Indiana town of Pawnee. It was released on DVD November 30, 2010.

Ann breaks up with Andy and begins dating Mark, with Leslie's approval. It is revealed that Tom's marriage to the attractive surgeon Wendy Haverford is actually a green card marriage which, to his disappointment, eventually ends in divorce. Meanwhile, Ron is visited by his horrible ex-wife Tammy 2, a librarian who unsuccessfully tries seducing him into turning the pit into a library branch. The pit is eventually filled in and converted to a multi-purpose lot. April becomes attracted to Andy, but he remains fixated on Ann. Just as Mark plans to propose to Ann, she reveals she no longer has feelings for him. They break up, and Mark leaves his city hall career for a private sector job. Meanwhile, a crippling budget deficit leads state auditors Chris Traeger and Ben Wyatt to temporarily shut down the Pawnee government, much to Leslie's horror and Ron's delight. Meanwhile, Andy develops feelings for April, but she fears he is still hung up on Ann. Ann later kisses Andy due to conflicting emotions from her break-up with Mark, prompting April to angrily reject Andy. The season ends with Tom shockingly discovering that Ron is now dating his ex-wife, Wendy. 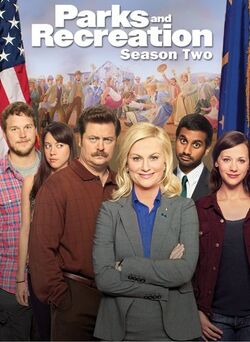 All of the principal cast members from the first season returned for the second season, including Amy Poehler, Rashida Jones, Aziz Ansari, Nick Offerman, Aubrey Plaza and Paul Schneider. Chris Pratt, who was billed as a guest star throughout the first season despite appearing in every episode, was promoted to the main cast in season two. Andy Dwyer, Pratt's character, was originally supposed to appear only in the first season, but the producers liked Pratt so much that almost immediately after casting him, they decided to eventually make Andy a regular character.

Schneider will leave Parks and Recreation at the end of the second season to focus on his film career. Schur said when Mark Brendanawicz was first introduced, it was anticipated he would eventually become a less frequent character that went back and forth between the government and private sector. Both Schur and Schneider had indicated they would like the character to make guest appearances in the third season.

Following season one, Parks and Recreation was originally renewed for a half season-worth of episodes, but was picked up for a full season in late October 2009. Greg Daniels said since the Parks and Recreation characters had now been established in the second season, the writers were able to write more specifically for the actors. Daniels said he believed this allowed the characters to become more balanced, rather than simply an accumulation of flaws, as they sometimes appeared in the first season. The writing staff also made an effort to be more topical with the second season episodes. Likewise, the episode "Pawnee Zoo" included social commentary about same-sex marriage. Likewise, "The Stakeout" included a parody of the arrest of Henry Louis Gates, a black Harvard University professor who was arrested after police mistakenly thought he was breaking into his own home in Cambridge, Massachusetts, and a sex scandal involving a Pawnee councilman in "Practice Date" mirrored the real-life 2009 scandal of South Carolina Governor Mark Sanford, who publicly admitted to a long-term extramarital affair with an Argentinian woman.

The writers made several other changes going from season one to season two, including making the scripts more focused around the entire cast rather than just Leslie. They also tried to make Leslie appear more intelligent in the second season after receiving audience feedback that she appeared "ditzy", which Michael Schur said was never their intention. Schur said, "In the end, we just felt that Amy is an enormously likable presence on screen, so as the season went on we just tried to create situations where that would shine through." During the episode "Kaboom", a major subplot was resolved when the large construction pit that Leslie had long sought to turn into a park was filled with dirt and turned into a lot. The pit was first established in the premiere episode and had been a focal point of the series since the show began.

Amy Poehler became pregnant during the latter half of the season, with her baby due in the summer or early fall of 2010. The Parks and Recreation producers decided not to write the pregnancy into the show, so they decided to enter into a continuous production after the season ended to bank episodes for the third season.

The first season of Parks and Recreation received mixed to negative reviews, with many critics deeming it too similar to The Office, which shared the same mock documentary style as Parks and Recreation. In particular, several commentators said the naive and well-meaning Leslie Knope character too closely resembled The Office protagonist Michael Scott, a well-intentioned but dimwitted protagonist manager of a paper company sales office. However, most critics declared the second season a vast improvement over the first, with some even claiming it had surpassed The Office and 30 Rock as the best comedy of NBC's Thursday line-up. It was declared the best comedy of the television season by Entertainment Weekly writer Henning Fog and The Star-Ledger television columnist Alan Sepinwall. Entertainment Weekly writer Michael Ausiello, who was critical of the first season, called it the "most improved" show of the season. Time magazine writer James Poniewozik included Parks and Recreation in his list of the 10 best television shows of 2009, and IGN declared it the best comedy series of 2009. Several reviewers called the second season one of the most impressive comebacks in television history.

Amy Poehler said the first season struggled in part due to extremely high expectations from comparisons to The Office. Parks and Recreation staff also felt part of the reason for the improvement was that the characters have become better developed, and viewers have become to like and care more about them. Likewise, Michael Schur believed much of the early criticism stemmed from the fact that audiences were not yet familiar with the characters, and he believed viewers liked the second season better because they had gotten to know the characters better as the series progressed. Commentators said the supporting cast was now working with better material and that Amy Poehler's character had improved and become less over-the-top and more human than in the first season, and more distinct from Michael Scott. Several reviewers praised the decision to drop season one subplots that risked becoming stale, like whether Andy and Ann would keep dating, and Leslie's long-standing crush on Mark. Others complimented the decision to fill in the pit during the second season, which they said freed the show up for more stories and better scripts. Despite the vast change in critical reception, Parks and Recreation staff said they felt only a few minor changes were made to the show itself. Michael Schur said, "I don't think magical fairy dust was sprinkled over the show. I just think we're getting better at it." NBC officials compared the late rush of critical acclaim for Parks and Recreation to that of The Office, which received mixed reviews during its first season before most critics agreed it found its rhythm in the second season.

Nick Offerman received considerable praise for his performance as Ron Swanson during the second season. Many reviewers praised Offerman's subtle and understated style of comedy, and said he was often the funniest part of the scenes he was in. Jonah Weiner of Slate magazine declared Swanson "Parks and Recreation's secret weapon" and "vital to the show's improvement". Aziz Ansari, who was particularly acclaimed during the first season for his role as Tom Haverford, received similar praise in the second season as well. Many reviewers were critical of the pairing of Mark and Ann, feeling the couple lacked chemistry and were often the least funny parts of the individual episodes. Entertainment Weekly writer Margaret Lyons called Mark and Ann the show's "Achilles' heel", and Sandra Gonzalez, also from Entertainment Weekly, wrote, "No matter what they do with these two, I can’t help but be bored."

Despite the critical success, the second season of Parks and Recreation continued to suffer in the Nielsen ratings. By December 2009, the average episode viewership was 5.3 million households. The average was lower than the other NBC comedy shows that aired Thursday night along with Parks and Recreation: Community drew an average 6.5 million households, 30 Rock an average 7.3 million, and The Office an average 10.1 million. By February 2010, ratings had begun to improve all of NBC's Thursday comedy shows, especially Parks and Recreation, but the network remained in fourth place among the major networks in Nielsen ratings. By the end of the season, the average viewership for the 24 episodes of season two was 4.68 million, lower than season one's average of 5.45 million households.

Amy Poehler was nominated for a Primetime Emmy Award for Outstanding Lead Actress in a Comedy Series. The episode "Telethon", in which Leslie frantically stays awake for 36 hours to volunteer for a charity telethon, was her performance submitted for Emmy award consideration. This marked Poehler's third Primetime Emmy nomination, having previously received twice for Outstanding Supporting Actress in a Comedy Series during her time on Saturday Night Live. Poehler ultimately lost to Edie Falco for her performance on the Showtime comedy series Nurse Jackie. Also that year, the Parks and Recreation theme song by Gaby Moreno and Vincent Jones was for the Emmy Award for Outstanding Main Title Theme Music, but the award again went to Nurse Jackie.

Retrieved from "https://parksandrecreation.fandom.com/wiki/Season_2?oldid=29774"
Community content is available under CC-BY-SA unless otherwise noted.