Parks and Recreation Wiki
Register
Don't have an account?
Sign In
Advertisement
in: Locations, Filming Location, Season 1 Locations,
and 6 more 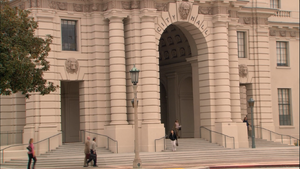 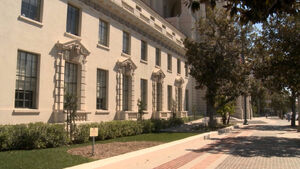 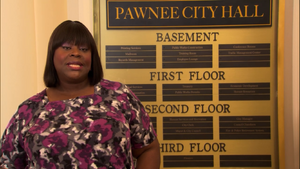 Every town has its own unique history, and Pawnee's is full of both pride and shame. Mostly shame. But some pride. But really: shame. The large murals that line the walls of Pioneer Hall depict some of the most famous and interesting moments in our town's past, and are well worth checking out as works of art -- even if they are also by any standard horrifying at a level it is difficult to comprehend.

Pioneer Hall is a hallway constructed in 1935 located in City Hall that features ten murals depicting the town's history. The murals were painted by the employees in the 1930s. The following are the most notable Murals.

For a while in the 1880s, most of the law enforcement officials in Pawnee either quit or died of self-inflicted gunshot wounds while drunk. As a result, things were pretty wild. Spontaneous bare-knuckle fighting rings spread throughout the town, including this one, in which the Reverend Bradley took on all comers after the Sunday Sermon. Here, the Reverend takes on Anna Beth Stevenson, who had won her previous 11 bouts against the men of the town. The streak came to an end on this punch, though Stevenson won the rematch a week later on a 60-round TKO.

The Trial of Chief Wamapo

Painted in 1936, this mural depicts the trial of Chief Wamapo, who was accused of "being Indian." Tragically, in 1834 that was a crime punishable by death.

Despite the proximity of the cannon to Wamapo's body, the cavalry missed him on their first two shots. On the third shot, they got lucky and hit his left shin. He died several years later of old age.

Pawnee would never have survived if settlers hadn't figured out ways to peacefully co-exist with their Native American neighbors. They would come together at "trading posts" to exchange food and goods. Sort of like a flea market, with a high risk of intentional small pox.

This baby grew up to be Anne Beth Stevenson, the woman being punched by the man in "Sunday Boxing." The Wamapoke tribe she was given to gave her the name "Lucky Devil."

The muralist chose to depict a rather disturbing and isolated event in the history of the zoo: in 1914, a Jewish ornithologist who was headed for the Mississippi River took a wrong turn, and wandered into Pawnee looking for directions. The mayor at the time had never seen a Jewish person before, and, believing him to be some kind of rare alien creature, placed him in the zoo's abandoned otter cage.

A few days later, the residents of Pawnee received confirmation that this was merely a human being with a different heritage, and let him out with great apologies. The mayor even invited the man to settle in Pawnee for good, an offer which the man politely declined.

The Native Americans are being pushed to the side, the Irish are trying to sell liquor, the women are dumping it out, and the Native Americans are drinking it. The Chinese are laughing at their misfortune. Meanwhile, they’re learning Western ways: they’ve dropped their chopsticks, and they’re eating hamburgers with a fork and a knife. In "The Camel", City Hall decides to paint over the "Spirit of Pawnee" because it has been repeatedly vandalized due to its racist undertones. However, all of the departments' murals are horrible and the "Spirit of Pawnee" mural is instead renamed to "The Diversity Express".

In 1867, the progressive Reverend Turnbill officiated a wedding between a white woman and a Wamapoke Indian chief. The secret ceremony was beautiful and romantic. But then word got out and the reception was a bloodbath. Fortunately, there were two survivors. Unfortunately, they were both horses.

A traveling magician came through town one time and he pulled a rabbit out of a hat, and the mob burned him at the stake for being a witch. The year was 1973. 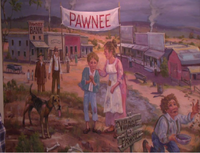 The Fourth Floor is the most depressing floor, and most employees avoid going there completely. There was once a popcorn machine placed in it but the wrong oil was used and everyone had to get throat surgery.

The Pawnee Courthouse is where Leslie Knope once attended an ethics committee hearing, led by Chris Traeger, because of her relationship with Ben Wyatt.

Pawnee City Hall is the home to most of the city's governmental Departments.