Partridge, Minnesota was founded in 1887.

When Ben Wyatt was 18 years old, he was elected Mayor of Partridge. He was impeached after only two months in office after running the town's finances into the ground, mainly due to the construction of a winter sports complex called "Ice Town". Even 20 years later, the town's residents are still bitter towards Ben, referring to him as "Ice Clown".

The town's mascot is Fred the Sled and is only brought out for special occasions. 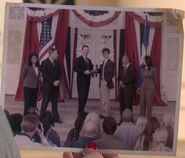 Ben being inaugurated as mayor at the age of eighteen
Community content is available under CC-BY-SA unless otherwise noted.
Advertisement