Pawnee
Orin is the creepy and intense friend of April Ludgate. He seldom speaks and often stares at people and makes them feel uncomfortable.

Orin was mentioned in a throw-away joke in "Time Capsule".

He first appears in "April and Andy's Fancy Party", where he made Ben Wyatt feel uncomfortable; at one point Ben said to him, "No, Orin, I don't know how I'm going to die. Wait, are you asking me or telling me?" At that same party, Orin spoke to Chris Traeger, but was overwhelmed by Chris' positivity.

Orin reappeared in an art show at "Jerry's Painting", where he stood silently and motionlessly next to his exhibition: a completely blank canvas.

In "Meet N Greet", Orin briefly appears trying to get into Ben's room during the Halloween party, but Ben tells him to get away before he is able to do so.

Orin reappears in "Operation Ann" as a candidate for Ann's Valentine. However, April introduce him to Leslie right before Ann arrives to the party, and Leslie yells at April that "Are you kidding? You brought Orin? Ann is not some weird morose mummy! Offense is intended, Orin! Let this be a wake up call about how you present yourself to the world".

In "Leslie Vs. April", April wears a T-shirt publicizing Orin's performance art show, "Human Farm". To distract April from her plan to build a dog park on Lot 48, Leslie takes April to the performance and suggests that she lead an arts program in Pawnee. April sees through Leslie's intentions and leaves, abandoning her next to a mooing Orin dressed as a sheep.

In "Animal Control", Orin is interviewed by Leslie and April as a candidate for running that department; unsurprisingly, he is deemed wanting.

In "Ann and Chris", he appears at Ann and Chris' farewell party dressed up as the Easter Bunny.  He's not happy about his task but Leslie tells him to get back to work.

He also appears in "Prom," where he pretends to be April's mom and takes April and Andy's photo.

In "Leslie & Ron", Orin appears briefly in the background at April's Party after she went to work for the National Parks Service.

Leslie: "Okay, everybody listen up: April's friend Orin is here. He's very intense, and very weird. So if you end up talking to him, just make sure you don't reveal anything personal about yourself."

Chris: "Exactly! Mortality! See, I like to take each day at a time. There's nothing in this world we can't accomplish if we try!" Orin: "...I have to go."

April: "This is publicity for Orin's new performance art show. He's an animal living on a human farm, and you can go and feed him from your own hand."

April: "What makes you qualified for animal control?" Orin: "I studied zoology in college. And I can control animals with my mind."
Add a photo to this gallery 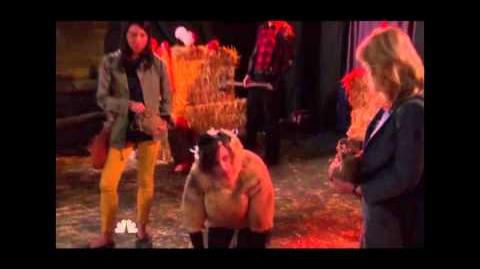 Retrieved from "https://parksandrecreation.fandom.com/wiki/Orin?oldid=30665"
Community content is available under CC-BY-SA unless otherwise noted.