Parks and Recreation Wiki
Register
Don't have an account?
Sign In
Advertisement
in: Characters, Recurring characters, Female Characters,
and 8 more

Joan Callamezzo is the eccentric host of Pawnee Today and a recurring character on the show.

Joan came to Pawnee in 1996 by way of Gary, Indiana. The daughter of Mason Owen Stephens, a former Broadway dancer and owner of the famed Footlights Dance Studio in Gary, Joan always loved to dance. She and her father made headlines in the summer of 1978 when they performed a modern pas de deux called The Apple tree at the Indiana Arts Festival. Reviews were mixed, with some calling it, "perverse..." and "strangely anti-family."

Joan's teenage years were fraught with tragedy. Her mom, Janine, known for her massive collection of exotic lawn statuaries, passed away in 1980. The tragedy occurred following a party Mason threw for his "business partner," Peter, who was almost certainly more than just a business partner, based on the facts that the two men often vacationed together, wore matching clothes, and were once caught by Janine having digital sex in the family's faux-wood-paneled rec room. After the sexually charged party, during which an intoxicated Janine destroyed a cake Mason had made especially for Peter in the shape of the trolley car from Meet Me in St. Louis, Janine overdosed on presciption pills. She was discovered in her yard clutching a concrete nativity sheep. These years were traumatic ones for Joan, but she lost herself in her dancing, experiencing it as a sort of escape. And she was about to get her big break.

While attending the University of Pittsburgh, Joan landed a small role in the smash hit movie Flashdance. She played a waitress at Mawby's Bar (the classy strip joint with the arty stripping) and can be seen in several scenes serving burgers in a tank top with no bra. She continued to audition for movie roles and scored small parts in other hit movies, such as Weekend at Bernies, Look Who's Talking Too, and The Silence of the Lambs, in all of which she played a dead body.

Joan's movie career took her all the way to Chicago, where she became an aerobic instructor. There she met Franzio Callamezzo, who (along with his brother Santino) owned the Body Factory Gym, where Joan was employed. In 1995, after a whirlwind courtship, Joan married Franzio in a small ceremony next to the Nautilus machines.

The Callamezzo brothers, looking to parlay their Body Factory mini-empire into other successes, began looking at small-market radio and television stations for purchase. The search led them all the way to Pawnee (and back to Joan's home state) when they purchased Pawnee's very own channel 46.

Formerly owned by the Baptist Church, Channel 46's programming had been limited to Paul and Sally Melcher's organ recitals, their terrifying puppet show, and a weekly children's Bible story reading by Paul Melcher's cousin Billy, who had been badly burned in a chemical fire. Within six months, the Callamezzo brothers revitalized Channel 46's programming lineup with shows like PM Pawnee, Sex Talk with Dr. Pearl, and The Word, With Perd. The Callamezzo brothers now had Channel 46's finger firmly planted on the pulse of Pawnee.

The expansion into showbiz delighted Joan, and she quickly became the host of her own fitness show. The Burn Zone with Joan premeired May 14, 1997, and was an immediate flop. Joan had failed to notice the literal explosion of obese citizens in town, thanks to the introduction of high-fructose corn syrup into the city's drinking water. As such, workout shows were not super-popular. Joan's failure resulted in a tearful on-air breakdown during a twenty-four-count grapevine step-toe-step.

Dexhart appeared on the show's fifth episode to discuss the community center renovation and make his grandmother's dumplings, but Joan got so much more. During the last ten minutes of the program, in between bites of steaming dumpling, Joan slyly asked Dexhart to speak about the rumors of his extramarital affairs. The taste of his grandmother's dumplings and the entire bottle of white wine he consumed during the course of the show caused him to spill his guts out to Joan, admitting that indeed "he had a problem."

The Dexhart confession was a waterdshed moment for Joan. "I'd found my calling," she wrote. "Investigative journalism. I realized that it was time for me to take my place on the Mount Rushmore of female journalists, with Barbara Walters, Oprah and that's all I can think of. Just us three."

On January 9, 1998, Pawnee Today with Joan Callamezzo premiered on Channel 46, and Joan pulled no punches. Armed with the motto "Tears Equal Truth," she grilled Pawnee powerbrokers and glitterati about their private lives, failures and personal foibles, aiming to bring her guests to tearful, televised meltdowns. However, this ratings-grabbing technique began to fail her, as she soon found no one wanted to appear on Pawnee Today. A desperate second interview with Councilman Dexhart failed to recapture their old magic, though Dexhart did admit to another six extramarital affairs that happened since the first interview.

It was then Joan realized: she needed to face herself. As she put it: "I was forced to ask myself, why am I obsessively punishing people with their own truths? Is it because I am afraid to report on my own story?"

And report her own story she did. On March 15, 1998, Joan did a two-hour Pawnee Today special called "Callamezzo on Callamezzo." The special guest? Joan Callamezzo. Seated across from herself through the magic of television, Joan confronted Joan about the real pathology behind her "quest for the meltdown." Joan revealed that she was indeed having a meltdown of her own. She and Franzio were going through a bitter divorce and -bombshell!-she was leaving Franzio for his older brother Santino. "That interview saved me," she would later write. "I needed to tell Joan that Joan needed to leave Franzio."

This news rocked Pawnee to its core. Later in the interview, she opened up completely about her affair with her brother-in-law, her workout obsessions, and her issues with her father. This amazingly brave two hours placed Joan squarely back in the hearts of her Pawnee viewers, and guests were once again clamoring to be on Pawnee Today. "It was, as they say, 'the turning point.'"

With her honesty, wit, and sassy appeal, Joan continues to rule the cable access airwaves, and as each year goes by, she solidifies her role as Pawnee's most visible and influential citizen. In 2008 Joan did a tenth anniversary edition of Joan on Joan and claimed to have softened over the years. Reading aloud from her lengthy autobiography, she said, "I'm still a straight shooter, but now I don't always shoot to kill."

Joan first appeared in the episode "Pawnee Zoo", in which Leslie Knope was a guest on her show and found herself inundated with caller demands that she step down for marrying two male penguins. Joan again appeared on Pawnee Today in "Christmas Scandal" to report on Councilman Dexhart's claim of an affair between he and Leslie. Since the councilman asserted that Leslie had a mole her buttocks, Joan pressured Leslie into pulling down her pants to refute it.

In "Media Blitz" Leslie says, "Joan Callamezzo runs this town." Joan also appears in "Harvest Festival", in which it is revealed that she concentrates her reporting efforts on finding scandals, such as becoming excited when hearing the news of the Wamapoke Curse. She is also shown to be a rumor-mongerer, suggested by the show when Leslie states, "There is not, as one reporter suggested, dozens of escaped convicts running around the carnival grounds." and the camera pans to Joan. This is also supported by the fact that earlier in the episode Joan asks Leslie "how many of these carnies are illegal?"

Like many Pawnee residents, Callamezzo is an avid fan of Li'l Sebastian, exclaiming "Are you f*cking kidding me? You've got Li'l Sebastian?" after Leslie reveals that Li'l Sebastian will be at the Harvest Festival.

In "Born & Raised" Joan traps Leslie with her gotcha journalism, revealing on live television that Leslie was not born in Pawnee. Tom, hoping he can use his flirtatious relationship with Joan to dispel this rumor and get Leslie's book in Joan's book club, takes her out for dinner with Ben. Joan reveals that she has just divorced her husband, and begins aggressively flirting with a terrified Tom. Joan becomes inebriated, and the two men are forced to carry her home. While there, they recoil from the many nude portraits of Joan decorating her bedroom.

"I'm a woman with a strong sexual appetite. I'm like a caged peacock, yearning for the wind on my haunches." 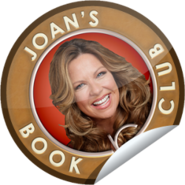