Parks and Recreation Wiki
Register
Don't have an account?
Sign In
Advertisement
in: Characters, Main characters, Gergich Family,
and 10 more

View source
watch 02:31
Parks and Recreation Profile: Jerry Gergich
Do you like this video?
Play Sound

An unnamed family consisting of 30 other members

Garry was a married father of three girls, who worked for the Department of Parks and Recreation. His wife Gayle is a beautiful blonde woman, and their daughters are similarly attractive.

Garry was often mistreated due to his embarrassing history, which is a collection of awkward incidents resulting from his apparent clumsiness and ineptitude. While he is the butt of endless mockery, he is shown to have one of the happiest and most fulfilled lives of any character.

He seems to have a normal family life and a strong artistic side. He once created a mural of an alcove of Pawnee City Hall, which was actually composed of small pictures of Pawnee citizens. He is also a skilled pianist, an amateur inventor, a good chef and a talented painter.

Due to his reputation as a sad excuse for a human, Garry is often dismissed even if he is clearly in the right and what he has created is breathtaking. Outside of work, mainly with his family, he is shown to be often charismatic, confident and well liked.

Garry's personality is not very developed at this point in the show, and his role mostly consists of being the co-worker who is constantly mocked by the other employees.

In the episode "Practice Date", while the Parks Department is attempting to dig up dirt on one another, several things come out about Garry. Dave Sanderson states Garry has had a few public urination violations. Mark Brendanawicz reveals Garry's adoptive mother was arrested for marijuana.  When asked if he knew about this, Garry responded that he didn't know he was adopted. It's also revealed that Garry was once hit by a fire truck and had to have plastic surgery.

When one of the city hall murals is defaced, the Parks Department is tasked with creating a new mural in the episode "The Camel". While presenting his work, a pointillism piece that includes pictures of all the citizens in Pawnee creating an image of the city hall, he refers to it as a "murinal" rather than mural, opening him up to ridicule from the entire department.

In "Park Safety", Garry claimed he was mugged and the office was more accepting of him as he recovered, but he later admitted to Leslie that he actually got hurt when he fell while trying to retrieve a burrito he had dropped at a park. When Mark pointed out to Leslie that Garry was so terrified of being mocked by his co-workers that he made up a ridiculous story to avoid that, Leslie went along with the lie, and Garry later returned to being his old self around the office.

Garry paints a portrait of Leslie Knope (It was not meant to be of Leslie, but he explains when he thinks of "powerful women," he thinks of Leslie) for a community art show that depicts her as a bare-chested goddess in "Garry's Painting". However, the community demands that the artwork be taken down due to the nudity. Leslie and Garry decide to create a duplicate painting, but one that has Tom Haverford as the centaur, so that the community wouldn't object to it anymore, while Leslie hides the actual painting.

In "Road Trip", we see that Donna and Jerry have a surprisingly good relationship and get along well when together (although Donna is prone to mocking him in group settings). The two win Tom's devised game of 'Know Your Boo', with Jerry recalling Donna's celebrity crush on Prince and the fact she would have sex in her Mercedes.

During Donna and Tom's "Treat Yo' Self", Garry was left alone at the office so Chris Traeger gives him the day off. He invites Chris to go along with him to lunch with his daughter. At first, Chris declines but later accepts when he sees that Milly is very attractive. Garry struggles with Chris and Milly's relationship, especially since Chris insists on giving Garry constant updates on what he and Milly have been doing.

In "The Trial of Leslie Knope", it is revealed that his real name is Garry. On his first day, the old Director got his name wrong, and Garry didn't think he should correct him. Garry is conflicted even further when he finds out Milly plans to break up with Chris at the same time as Chris plans to ask her to move in.

During Leslie's campaign, Jerry contributes to her events and works alongside the Parks and Recreation Team while disseminating flyers and calling for donations. Donna admires Jerry's ability to do busy work, cancelling a date to watch him mechanically sort envelopes for several hours uninterrupted (although he does them wrong). He is content with these tasks as they make sense to him. In the Season 4 finale, Garry was worried because he forgot to cast a vote for Leslie in the city council election. Luckily, she wins the election, but Ron reveals to Leslie that Garry forgot to vote.

In "Halloween Surprise" Leslie and Ann scared Garry as he emerged from the men's room. He had a heart attack which resulted in a prolonged bout of flatulence. He survived, and Leslie arranged a tag sale/auction in an attempt to raise money for his medical bills.

Garry and his family threw an elaborate Christmas party, to which Donna, Tom, Andy and April were surprised to find they had not been invited. They later learned that they HAD received invitations via e-mail, but those invitations had been removed by what they refer to as the "Garry filter" on their e-mail accounts. It was also revealed that Garry's co-workers collect money throughout the year whenever they laugh at something embarrassing that Garry does, which they then use to treat themselves to a fancy dinner at year's end (without his knowledge). Ann shamed the group into giving this money to Garry.

In "Animal Control" Garry was an applicant to run the Pawnee Animal Control department. It was revealed that Garry's degree was from a two-year college, meaning that he was not technically qualified for the job he had been doing in the Parks Department. Chris agreed to let Garry keep his job, but at a reduced salary, which Garry considered to be fair.

Garry retired in the episode "Garry's Retirement," but returned to work part-time at the Parks Department at Ron's request (which Ron did as a favor for Tom, who had found himself being treated as the "new Garry" in the office). Andy called him Jeremy when he retired.

After the merger of Pawnee and Eagleton, Garry returns to the Parks Department full-time as a filing clerk. Seeking a fresh start, he asks everyone to call him by his real name of "Garry," however, after some confusion and annoyance (during which Garry calls himself by the wrong name), everyone begins to call him "Larry." April went so far as to give him the new last name of "Gengurch," which Garry then used on his outgoing voicemail message.

In "Recall Vote", Larry was tasked with carving pumpkins for City Hall's haunted house. He disappoints Leslie by carving the Gergich family's faces into the pumpkins.  He suggests to Chris and Ann that they should get married, observing how much in love they seem to be.

In "Anniversaries," he helps Ben organize surprises for Ben's and Leslie's first wedding anniversary one day early.  These include a couple massage, a ride in a horse-drawn carriage, tango lessons, and a meal.  However, due to Leslie's busy schedule Ben ends up spending the day with Larry and they get on really well. Later in the season, during the episode "Galentine's Day," Ben expresses his fondness for Larry to the rest of the Parks Department, even though it is tantamount to social suicide.

In "Flu Season 2," he was placed in a decontamination tent so that he does not spread his flu.

In the two-part season finale "Moving Up," he helps out at Tom's restaurant but mistakenly includes graphic pictures of his dog on the menus and ends up knocking over several shelves with glasses.  At the end of the episode there is a time jump to three years later and he has been renamed "Terry."

The show now takes place in 2017, where Larry works for Leslie on the 3rd floor. He is now known as "Terry," since there is already another Larry in the department ("2017").

At Donna and Joe's wedding everyone teases Terry for his name card for saying "Garry" and decide to call him "Garry" from now on. He's secretly very happy, because after 30 years his co-workers are finally calling him by his real name. It was Donna who set it up, as a treat to her friend. ("Donna & Joe")

In "Two Funerals" Garry becomes Interim Mayor of Pawnee after the death of Mayor Gunderson.

In the series finale, a flashforward shows that Garry will be elected mayor for several more terms. He remains happily married to Gayle and has several grandchildren and great-grandchildren who all love and adore him. It also shows he died peacefully on his 100th birthday. His last name is mis-spelled on his tombstone "Girgich."

This character has a Photo Gallery. 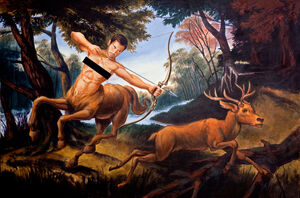 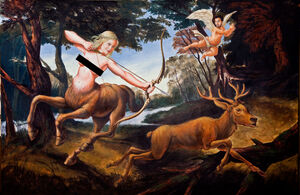 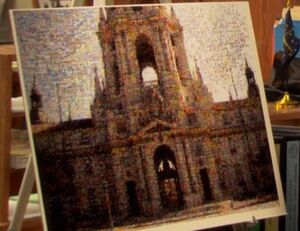 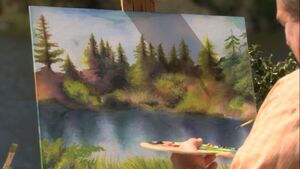