Parks and Recreation Wiki
Register
Don't have an account?
Sign In
Advertisement
in: Characters, Alter Egos, Male Characters,
and 2 more

Edit
watch 01:11
Parks and Recreation Profile: Duke Silver
Do you like this video?
Play Sound

Duke Silver is an alias used by Ron Swanson to perform jazz on the tenor saxophone. He is the leader of The Duke Silver Trio, and he performs at Cozy's Bar in Eagleton, Indiana, on the second Thursday of every month. His fanbase consists of middle-aged women almost exclusively, including April Ludgate's mother.

Very few City Hall employees know of Duke Silver, and Ron does practically anything to keep things this way. The first person to reveal knowledge of Duke is Mark Brendanawicz, who tells Tom Haverford to seek out Duke at Cozy's Bar while he is seeking dirt on Ron. April reveals her knowledge of Duke in "94 Meetings", saying her mom has always been a fan and she recognized him as Duke the first day she met him. The last person to discover Duke before he goes public is Andy Dwyer, who is sent to Cozy's Bar by Craig Middlebrooks when scouting bands for the unity concert because Craig says the bar gets pretty packed on Thursdays, despite never having gone. When Andy discovers this, Ron decides too many people know of Duke now and attempts to throw away his saxophone all together, until Andy convinces him to return to music and play the Unity Concert, where he officially comes out publicly as Duke Silver.

[1]In "Dave Returns", it is revealed that Duke records all of his albums at the Doubletime Sound Studio. He records the saxophone solo in "Catch Your Dream" by Andy's band Mouse Rat, unbeknownst to Andy.

In "Ron and Diane" , Ron's girlfriend, Diane, feels intimidated by his relationship with Leslie, and is afraid she will not get to know Ron as well as Leslie does. Ron reveals to Diane that he is in fact Duke Silver, something Leslie is not aware of, in order to prove to her that, although Leslie is an important person in his life, Diane is also extremely important to him and is a very special person in his life.

Ron publicly revealed his identity as Duke at the conclusion of the Unity Concert, joining Andy and the other performers on stage during the closing song, much to the surprise of the remaining characters. 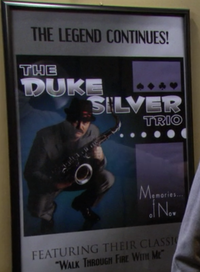 It is unknown when Ron Swanson began performing as Duke. During an interview as Duke Ron said, "Jazz sax is a connection to the heavens. Human breath enters, and Angel breath leaves." He is inspired by the musicians Coltrane, Getz, and Foreigner. Duke is known for saying, "Come love with me… and maybe we can walk through fire together."[1]